On the Second track route on the T8 Tunnel Portal in Dekani,  the shrine of Saint Barbara, the patron saint of tunnel workers, was erected, which is considered a custom at the beginning of tunnel works. Kolektor CPG as the Leading Partner in the Consortium, set up the shrine of Saint Barbara in the presence of Mr. Aleš Mihelič, State Secretary at the Ministry of Infrastructure, Mr. Aleš Bržan, Mayor of the Municipality of Koper, Mr. Pavel Hevka, General Manager of 2TDK, Msgr. dr. Jurij Bizjak, Bishop of Koper. The statue was placed in the chapel by the godmother of the tunnel, Mrs. Alenka Štrucl Dovgan, the Mayor of the Municipality of Divača. Saint Barbara thus became the protector of the T8 tunnel. 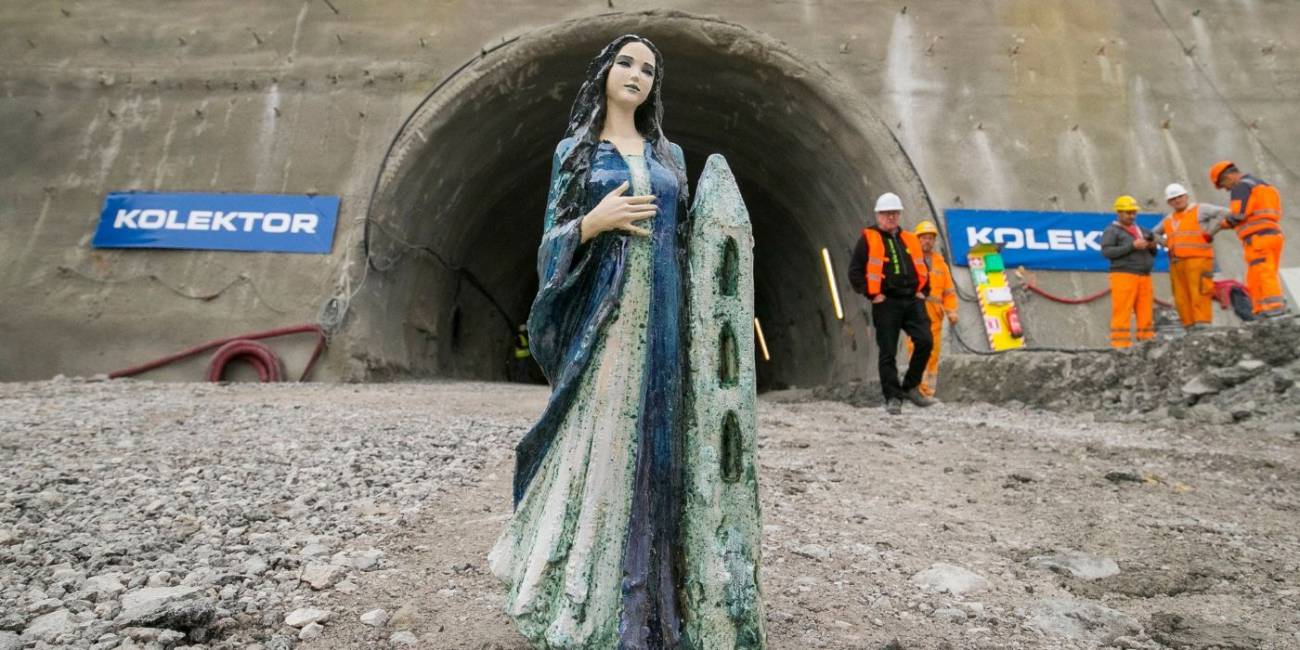 Setting up of the Saint Barbara shrine, the patron saint of tunnel workers on the project of construction of the Second track line.

As many as 7 tunnels (the longest in the length of 6,714 m) are planned on the Second track route in the length of 27.1 km, which together with the service and exit pipes measure 37.4 km. Construction of the Second track in such a demanding geological area would not be possible without tunnels. For this reason the setting up of the Saint Barbara shrine is an important part of this type of projects. It took place on the T8 tunnel portal, which is part of the single-track Divača–Koper railway line on the Črni Kal–Koper section. This is the longest railway line tunnel (measuring approximately 3.8 km) on ​​the lower section of the route out of a total of seven tunnels on the entire Second track route. Setting up of the Saint Barbara shrine in the T8 tunnel is thus considered a symbolic act of safety and security.

The T8 tunnel area is considered to be partially inhabited, and at the same time several infrastructure facilities are placed in this area, including the Dekani motorway tunnel and the state motorway under

which the excavation is located. This means that throughout the construction of the T8 tunnel, the area will be closely monitored and supervised through geological and geomechanical monitoring.

To date, the length of the excavated part of the T8 tunnel is 51 meters from the estimated length of the 3,808 meters of the tunnel. Excavation of the tunnel is carried out on both sides, so the breakthrough of the entire T8 tunnel is expected to be somewhere at 1,900 meters. The excavation is taking place in parallel also at the T7 tunnel construction site at Črni Kal, where the work is being carried out by Yapı Merkezi. They are currently at 60 meters out of a projected total of 1,154 meters. Work on both tunnels is progressing according to schedule. Excavations will soon begin also on the T1 Divača and T8 Divača tunnels.

Today Kristjan Mugerli, Director of Kolektor CPG, Aleš Bržan, Mayor of the Municipality of Koper, and Pavle Hevka, General Manager of 2TDK attended the setting up of the Saint Barbara shrine, which they believe will not only protect the tunnel workers, but also others who oversee the implementation of the entire route of the Divača-Koper railway line. The Bishop of Koper msgr. dr. Jurij Bizjak dedicated the statue of Saint Barbara, and the mayor of the Municipality of Divača Mrs. Alenka Štrucl Dovgan put it in the shrine. 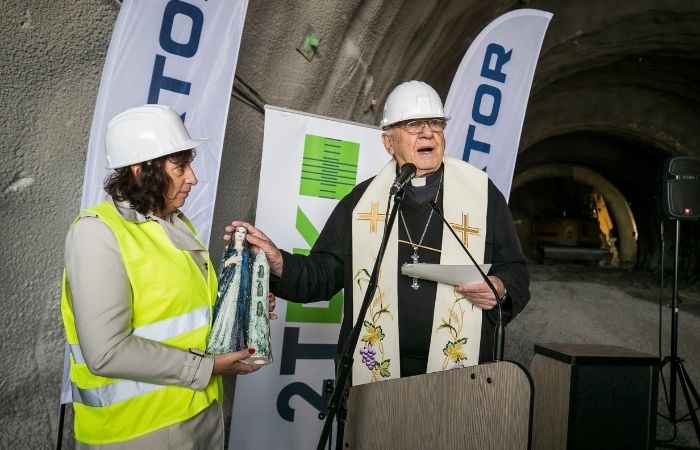 In his introductory speech Mr. Kristjan Mugerli, Director of Kolektor CPG and representative of the Leading Partner in the Consortium, presented the significance of today's meeting: »Also during the construction of the Second track tunnels, we, at Kolektor CPG, decided to respect the extremely important tradition - the setting up of the shrine of Saint Barbara, the patron saint of tunnel workers. The custom, which we believe serves its purpose and will not protect only the tunnel workers but everybody who is watching, breathing, and living with this largest and most demanding infrastructure project. Although today we are standing at the exit location of the last Second track tunnel, we have actually just started and there is still a demanding path ahead. The construction of the Second track is a very important project for us. Works in the tunnels can be risky and difficult, however, we will do everything in our power to ensure that they are carried out in a reasoned and controlled manner, and above all safe for everyone, our employees, our Turkish colleagues and our other partners.« 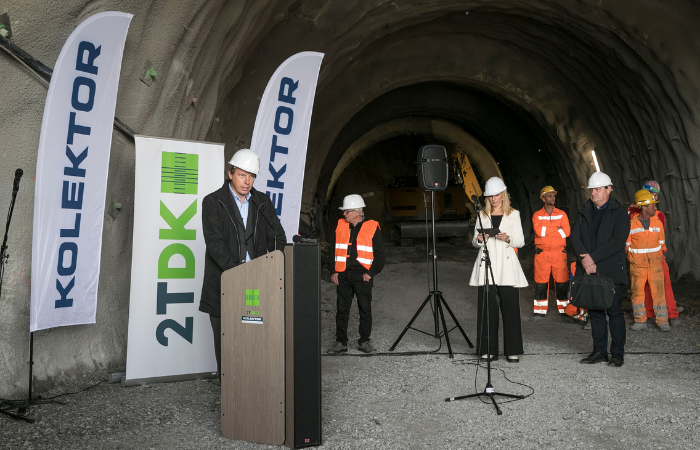 The scope and complexity of the entire Second Track project, not only the construction of tunnels, also dictates the use of state-of-the-art digital construction support. The construction of the Divača—Koper railway line is a project, where the investor has already envisaged the digitalisation of the construction site. To this end, Kolektor CPG, as the leading partner in the Consortium, together with the project partners, established a digital environment for communication and monitoring of the construction site. The digital environment consists of an on-line platform that provides support for paperless reporting, electronic forms and communication between all participants, and allows monitoring the progress of the construction works. The goal is to obtain one central source of information, all documentation and coordination in one place, acceleration of processes, transparency of work flows, activities and tasks, and time savings. In addition, the platform allows all the participants to access plans and 3D models any time and anywhere, whereby a phone, tablet or computer can be used for access.

In his speech, Aleš Bržan, Mayor of the Municipality of Koper, explained the significance of the railway line for the Municipality of Koper: »As the mayor, I am responsible for more than 50,000 citizens, and I wish and hope that the works on all sections would proceed smoothly, without major complications and within the planned schedules. And above all, with as little burden as possible for the local population.« 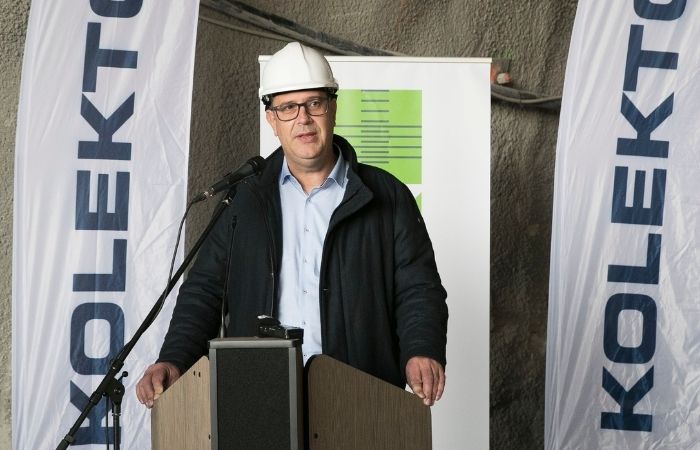 Also Pavle Hevka, General Director of 2TDK also emphasized the significance of Saint Barbara for the safety of all participants in the construction of the Divača—Koper railway line and added: »The prayer to Saint Barbara will inspire confidence in all of us that all workers on this demanding project from the beginning to the end of construction works are protected against all inconveniences of natural, human and other forces, and that on the day of the handover of the Second track line everyone who started with the construction of this largest Slovenian infrastructure project, is happy and celebrates the completion of the works.« 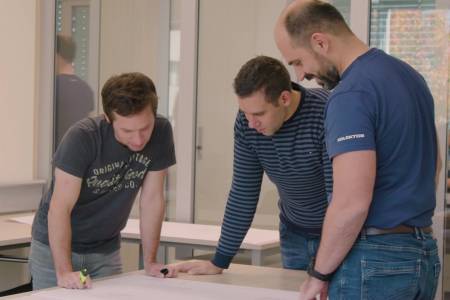 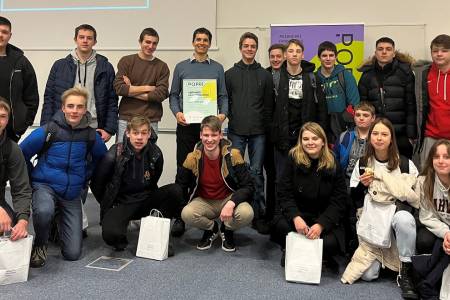 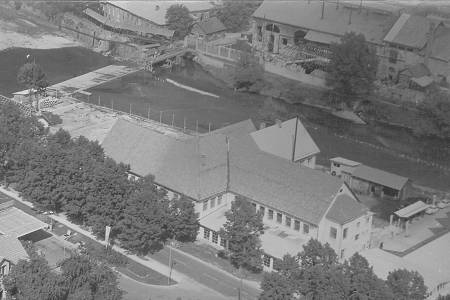 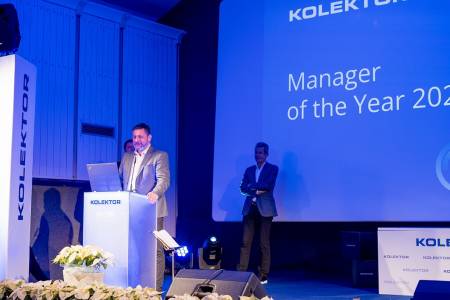 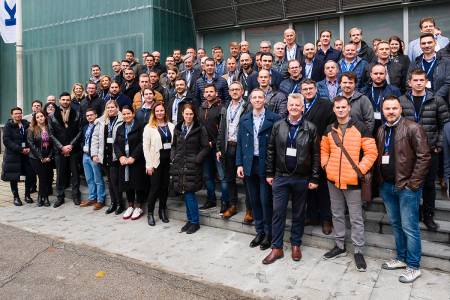