Have a glass of seawater with us!

Billions of people still have no access to drinking water or sanitation facilities, while the demand for drinking water is growing. Crucial in addressing the growing demand for water - in face of threats to water safety and climate change (increased frequency of drought and flooding) - is a more efficient consumption and management of water. One of the main methods for acquiring fresh water is desalination of saline seawater.

Desalination device on the island

Desalination of seawater is on the rise mainly in countries lacking traditional freshwater sources (e.g. Middle East countries). But for the sake of ever greater demand for freshwater and economically sustainable price of desalination, other countries are also opting for this technology. According to the report for the year 2019 on the indicators of the SDGs (Objective 6: Clean water and sanitary arrangements), the share of the global population using safe drinking water supply is 71 percent. An additional 19 percent of the world's population rely on only basic drinking water services. This means that 785 million people are left with not even the basic access to drinking water.

Seas and oceans as sources of fresh water

In seaside places where fresh water is not available to be used as drinking water, the rainwater is used as a source of drinking water. Though, with increasing consumption, it was no longer possible to provide sufficient land for collection and storage tanks. Until someone looked out to the sear and realized that it represents an unlimited source of water. However, since the sea water is salty, it is necessary to desalted it so that it can be used for drinking water.

The oldest method of desalting is volatilization and condensation using solar power.
The next is to vaporization with different sources of heat (from sun to heating and electric heaters). The modern method of desalination is reverse osmosis. It`s the finest membrane filtration technology. Membrane technologies available from the most coarse one to the most fine one, are: microfiltration, ultrafiltration, nanofiltration, and reverse osmosis. The membranes used retain between 90 and 99.98 percent of the dissolved substances. 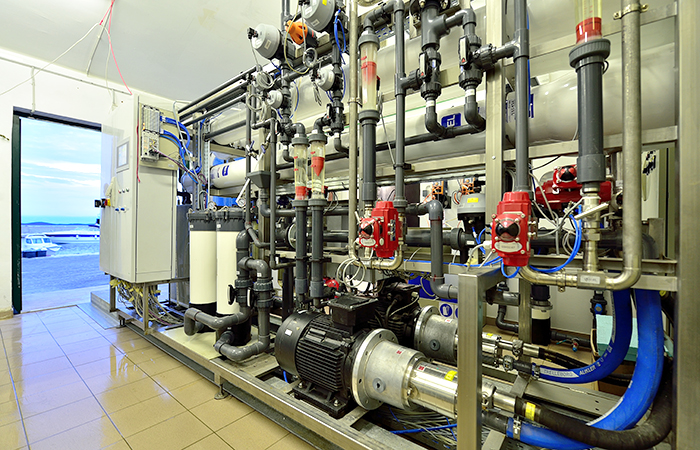 The island of Susak is located in the Adriatic Sea west of Mali Lošinj and has no fresh water springs. The water infrastructure is supplied from the tank of drinking water in the port. Every once in a while, the water delivered form the Vransko lake on the island of Cres by the “water-supplying boat” (Brod Vodonosac). A disadvantage of this method is a relatively high price and stale water. A local water company opted for desalination by means of the reverse osmosis. Their decision was powered by a substantial co-financing of the project by the EU.

Required capacity of the device is 2x3.2m3/h of fresh water. The process of desalination comprises of the following phases: water capture from the sea, pre-cleaning, filtration through absolute filters, desalination, re-mineralization, disinfection by adding chlorine to prevent infections in the water system.

After the re-mineralization the water tastes good - partly due to concentration of salt slightly higher than we are used to in our drinking water.